Def. Sec. Gates - Defense Budget not the problem with deficit

xmacro Posts: 3,402 ✭
May 2011 in Non Cigar Related
See the graph below; so many times people quip that if we cut the defense budget, it'll magically solve our deficit problems, as if the military is so difficult to maintain. Here's a good article from the WSJ:

Robert Gates, who steps down next month after four-plus years at the Pentagon, is making his retirement lap a tutorial on America's defense spending and security needs. His message is welcome, especially on Memorial Day, and even if he couldn't always heed it in his time as Secretary of Defense.

In a series of farewell speeches, Mr. Gates has warned against cuts to weapon programs and troop levels that would make America vulnerable in "a complex and unpredictable security environment," as he said Sunday at Notre Dame. On Tuesday at the American Enterprise Institute, Mr. Gates noted that the U.S. went on "a procurement holiday" in the 1990s, when the Clinton Administration decided to cash in the Cold War peace dividend. The past decade showed that history (and war) didn't end in 1989.

"It is vitally important to protect the military modernization accounts," he said, and push ahead with new capabilities, from an air refueling tanker fleet to ballistic missile submarines.

America's role as a global leader depends on its ability to project power. In historical terms, the U.S. spends relatively little on defense today, even after the post-9/11 buildup. This year's $530 billion budget accounts for 3.5% of GDP, 4.5% when the costs of the Afghan and Iraq wars are included. The U.S. spent, on average, 7.5% of GDP on defense throughout the Cold War, and 6.2% at the height of the Reagan buildup in 1986. But on coming into office, the Obama Administration put the Pentagon on a fiscal dieteven as it foisted new European-sized entitlements on America, starting with $2.6 trillion for ObamaCare. The White House proposed a $553 billion defense budget for 2012, $13 billion below what it projected last year. Through 2016, the Pentagon will see virtually zero growth in spending and will have to whittle down the Army and Marine Corps by 47,000 troops. The White House originally wanted deeper savings of up to $150 billion.

Mr. Gates deserves credit for fighting off the worst White House instincts, but his biggest defeat was not getting a share of the stimulus. Instead he has cut or killed some $350 billion worth of weapon programs. He told his four service chiefs last August to find $100 billion in savings. The White House pocketed that and asked for another $78 billion. Last year, Mr. Gates said that the Pentagon needs 2%-3% real budget growth merely to sustain what it's doing now, but it could make do with 1%. The White House gave him 0%.

In the Gates term, resources were focused on the demands of today's wars over hypothetical conflicts of tomorrow. This approach made sense at the start of his tenure in 2007, when the U.S. was in a hard fight in Iraq. Yet this has distracted from budgeting to address the rise of China and perhaps of regional powers like a nuclear Iran that will shape the security future. The decision to stop producing the F-22 fighter and to kill several promising missile defense programs may come back to haunt the U.S.

Mr. Gates knows well that America won't balance its budget by squeezing the Pentagon. "If you cut the defense budget by 10%, which would be catastrophic in terms of force structure, that's $55 billion out of a $1.4 trillion deficit," he told the Journal's CEO Council conference last November. "We are not the problem." 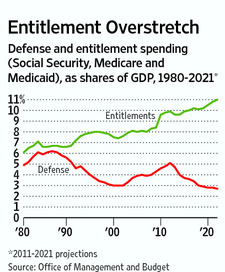 So what is? Mr. Gates acknowledged it only in passing this week, but the reality is that the entitlement state is crowding out national defense. Over two decades ago, liberal historian Paul Kennedy claimed that "imperial overstretch" had brought first the Romans, then the British and now Americans down to size. He was wrong then, but what's really happening now is "entitlement overstretch," to quote military analyst Andrew Krepinevich.

The American entitlement state was born with the New Deal, got fat with the Great Society of the 1960s and hit another growth spurt in the first two years of the Obama era. The big three entitlementsSocial Security, Medicaid and Medicare, plus other retirement and disability expensesaccounted for 4.9% of GDP by 1970, eclipsed defense spending in 1976 and stood at 9.8% as of last year. Under current projections, entitlements will eat up 10.8% of GDP by 2020, while defense spending goes down to 2.7%. On current trends, those entitlements will consume all tax revenues by 2052, estimates Mackenzie Eaglen of the Heritage Foundation.

Europe went down this yellow brick road decades ago and today spends just 1.7% of GDP on defense. The Europeans get a free security ride from America, but who will the U.S. turn to for protectionChina?

As Reagan knew, America's global power begins at home, with a strong economy able to generate wealth. The push for defense cuts reflects the reality of a weak recovery and a national debt that has doubled in the last two years. But the Obama Administration made a conscious decision to squeeze defense while pouring money on everything else.

"More perhaps than any other Secretary of Defense, I have been a strong advocate of soft powerof the critical importance of diplomacy and development as fundamental components of our foreign policy and national security," Mr. Gates said at Notre Dame. "But make no mistake, the ultimate guarantee against the success of aggressors, dictators and terrorists in the 21st century, as in the 20th, is hard powerthe size, strength and global reach of the United States military."

That's a crucial message for Republican deficit hawks, and especially for a Commander in Chief who inherited the capability to capture Osama bin Laden half way around the world but is on track to leave America militarily weaker than he found it.