Why we'll never agree on how to fix the budget

xmacro Posts: 3,402 ✭
May 2011 in Non Cigar Related
From the WSJ; long story short, a billionaire commissioned 6 think tanks to come up with ways to solve the budget problems. Their idea's show there's almost no common ground between them. The reason? Because at it's heart, it's a fundamental difference in the view of how much power Gov't should have. Liberals/Progressives think Gov't should grow and be in charge of more functions of everyday life, Conservatives think it should shrink.

Billionaire Pete Peterson's anti-deficit campaign has energy, staff and moneylots of it. So when his foundation wanted organizations of different political leanings to subject their deficit-reduction plans to scrutiny by veteran budget analysts, it offered each $200,000.

Not surprisingly, six groups volunteered. The results, unveiled at a Peter G. Peterson Foundationconclave Wednesday, are revealingthough not entirely encouraging in the foundation's quest for the elusive common ground.

The assignment was straightforward: Devise a plan that achieves fiscal sustainability, by your own definition (and, thus, targets vary.) Be specific enough so former Congressional Budget Office analysts can score it 10 and 25 years out.

For wonks there are spreadsheets. For the rest, this exercise illuminates choices that are obscured in the current rhetorically heated debate over the federal debt ceiling.

The big takeaway is this: The debate over how to reduce the deficit is truly a philosophical one about the size of government. There's more than one route to fiscal nirvana. In the exercise, AEI and Heritage get there by cutting spending and cutting taxesand cutting spending more. EPI, by contrast, gets there by spending more and taxing moreand increasing taxes more.

The right sees government at about 20% of gross domestic product, the left at 23% or 24%. The difference is huge, both in dollars (about half a trillion a year in taxes and spending) and in a range of policieseverything from how much the government should spend on infrastructure to how broad the social safety net should be. When forced, politicians resort to split-the-difference compromise. One reason that's so hard now is that this isn't only about numbers. It's about how much of our paychecks go to taxes, what services we get from government and what sort of society we want. It's complicated by an awkward truth: Even Americans who tell pollsters they prefer smaller government don't always support spending cuts to that end.

The other big lesson is that any serious deficit-reduction effort has to confront revenue, defense and health, three issues vexing today's behind-the-scenes deficit talks in Washington.

On defense, a fifth of government spending, there's simply a gap among the six plans in the Peterson exercise (in the neighborhood of $200 billion a year between right and left) on how much to give the Pentagon once Afghanistan and Iraq wind down.

On revenue, the differences aren't only about whether to boost taxesthe big onebut also about how to tax the people. No one much likes today's income tax, but there's little consensus on alternatives.

Four of the Peterson groups (spanning the ideological spectrum) would impose a carbon tax, both to raise money and resist climate change. Three (on the left) endorse a tax on financial transactions. Mr. Domenici and Ms. Rivlin offer a 6.5% national sales tax.

But here's the headline: All six would curb tax income-tax breaks, loopholes, deductions and credits, a.k.a. "tax expenditures" or "spending through the tax code" because Congress uses them as alternatives to explicit spending. "Until recently," the Peterson Foundation observes, "tax expenditures drew little scrutiny outside budget circles, but the Bowles-Simpson commission put [them] at the center of the public policy debate."

This unanimity points to the likelihood that any tax increases to which Republicans acquiesce in a deficit deal will curb tax expenditures rather than raise tax rates, perhaps even touching (while not eliminating) tax breaks for mortgages and employer-financed health insurance.

On health, there's agreementduh!that reducing future deficits requires restraining health-care spending, and that means Medicare. But the exercise demonstrates that agreement stops there.

There are two fundamentally different approaches. One relies on market forces, making beneficiaries pick up more of the tab and relying on them to be discerning shoppers and on competition among providers and insurers to control costs. The other relies more on government muscle, enforcing aggregate caps on spending and shifting Medicare from fee-for-service to give providers incentives to care for the whole patient, not to sell individual services.

In short, the debate isn't only about how much savings to squeeze from Medicare, but also about which unproven avenue to restraining health costs is best.

Oh, and one more thing. Farmers: Look out! One of the few things all six Peterson-commissioned proposals have in common is saving money on farm subsidies. 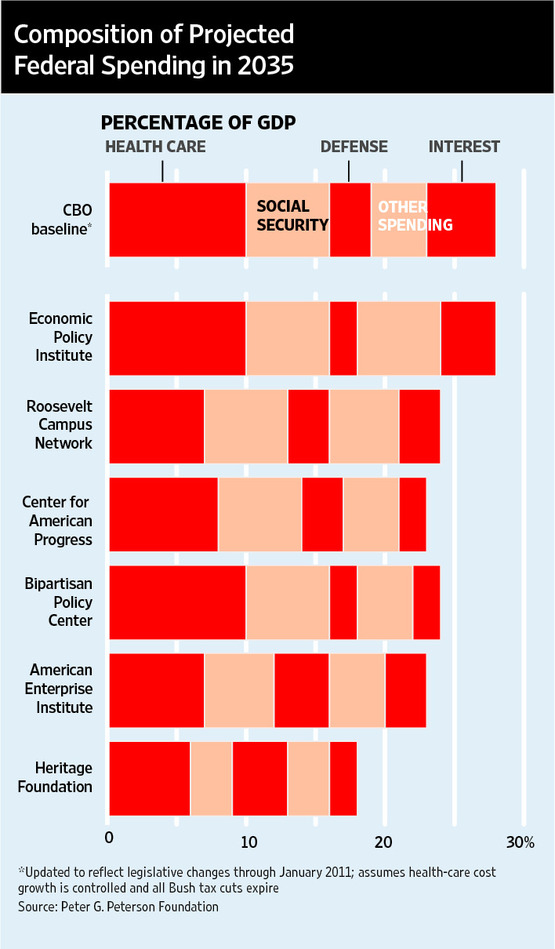