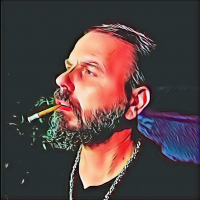 Cigargandist Lake Anna, VAPosts: 7 ✭
September 2019 in Ratings & Reviews
The CAO Flathead 642 piston,
from a cigar line inspired by the muscle cars of generations past. As I slid it's pantella form out of the wrapper, visions of Bel Airs and Box Novas toeing up to the line came to mind, their engines rumbling with the "rub-ta-dub-lub" broken rhythm only a lumpy cam can produce. The silver on blue band against the chocolatey dark wrapper hits the eye like the look of a well aged ragtop against chrome trim over a midnight blue metal flake paintjob.
The aroma of leather, like a lovingly cared for interior entices the nostrils, as the sweet molasses like scent makes you realize it's not the car's interior you smell, but the seat cover on the passenger side. She's a beauty in a leather jacket and the classic hotpants of the time. The gleam in her eye and the rumble of the engine assures you that you're in for a good time.
Lighting this stick is like revving to 3600RPM and dumping the clutch. Notes of moist earth and nuts hit the palette and throw you back in your seat from the g-forces, but it's the sweetness of raisins and currant that dominate with the hint of leather reminding you of that gleeful young lady in the passenger seat. First gear is winding out.
Second gear. Notes of toasted bread emerge and combine with walnut or pecan like the engine's work heating dual glasspack mufflers under the rapid acceleration. Again, you're pushed back into your seat as the woody tones of hickory and apple wood emerge. The raisins and leather of that sweet young lady is still there by your side, but it's the roar of the engine that dominates now.
Third gear. The toast, nuts and wood dominate like the engine screaming, building up to the grand finale. The lines in the road and fenceposts are nothing but a blur now as you hurtle towards the finish line. The cigar is getting a bit hot now, but that's expected at this point in the race. The stronger tones of the nuts and wood overpower the sweetness like the symphony of the engine, gearbox and road nearly drowns out the delight of the lass in the passenger seat. But make no mistake, she's still with you. You fly across the finish line, and of course, you're the winner with this cigar!
If you're looking for a full flavor cigar with a wide spectrum of flavor notes, this is it. Strap yourself in and get ready for the ride of your life. But never fear, this run will definitely last longer than a nine second quarter mile, and you always win the race and the girl at the end.
1