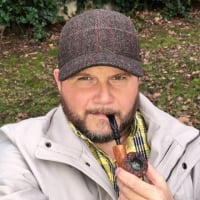 It started off fairly spicy with a blast of black pepper and a touch of cinnamon. The initial aroma was like nothing I've experienced in a cigar...very pleasant, but I couldn't figure out exactly what it was. About half way through the first third the pepper gave way to a smooth cedar with hints of coffee. The slightest touch of cinnamon was still there as well as a little sweetness.

The halfway point brought in new fruit-like flavors...like unsweetened prunes (this may be the raisin that others experienced). The "prune" flavor, along with the cedar, coffee and touch of cinnamon continued as the dominant flavors to the nub.

The burn and draw were perfect from start to finish! I never picked up any of the citrus flavors or aromas that others have written about. I will give the other two sticks a while longer to rest before I revisit them. The Grimalkin is definitely worth trying. I'd love to see what some of the BOTL's with more seasoned palates have to say about this one.
"Any cigar smoker is friend, because I know how he feels." Alfred de Musset