miller65rod MidwestPosts: 5,240 ✭✭✭✭✭
May 2016 in Ratings & Reviews
At 35.00 a stick MSRP this thing had better be in or above the level of an OPUS or even the outrageous Behike for that price I would think. I love me some My Father but 35.00 a stick that's nuts. 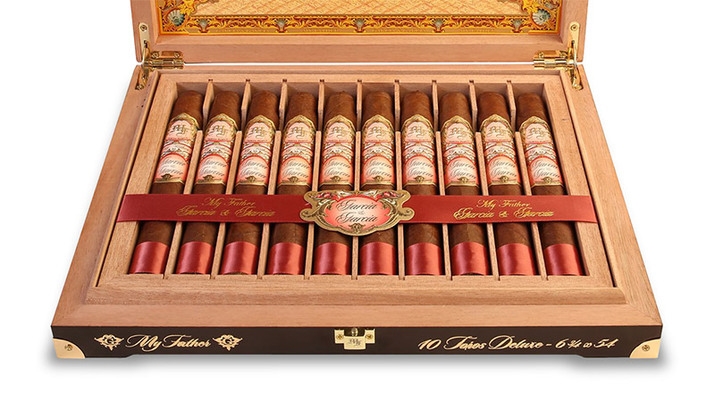 After months of delay, the most expensive My Father cigar to date will be arriving at retail in the first week of June, but the rollout is said to be scarce. Named My Father Garcia & Garcia, the new cigars are slated to carry a suggested retail price of $35 each.

"[Garcia & Garcia] will be shipped to a very small group of stores, which has been selected throughout the [United States]," said Alcides Montenegro, general manager and creative director at My Father Cigars. "This product is not a limited edition, but the company will maintain tight control over the amount distributed."

My Father Garcia & Garcia comes in one size only: a 6 3/4 inch by 54 ring vitola that My Father calls Toro Deluxe. The cigar is made with an Ecuadoran Habano rosado wrapper, Nicaraguan Criollo '98 binder and Nicaraguan fillers. The filler includes a small amount of Pelo de Oro tobacco, a Cuban-seed varietal known for its strength and sweetness but also its susceptibility to disease, making it difficult to grow. It is manufactured at My Father Cigars S.A. in Estelí, Nicaragua.

The cigars are adorned with the original My Father band, as well as a supplementary Garcia & Garcia band and will ship in hinged boxes of 10.

The new brand, which is meant to celebrate the craftsmanship of José "Pepin" Garcia and his son Jaime, was supposed hit retail shops in February, but had been delayed until now. According to Montenegro, paper production, such as the cigar bands and ribbons (which adorn the foot of the cigars) took longer than expected.

Retailers wishing to carry the cigar must meet several requirements in order to become an authorized Garcia & Garcia retailer. My Father is not disclosing details on the requirements but an expanded release to a larger number of retail shops is a possibility.

"It depends of how many stores we can find as a qualified stores," said Montenegro. "But we'll always have this product as something exclusive, never massive."