WaltBasil El Paso, TX Posts: 1,757 ✭✭✭
September 2014 in Non Cigar Related
I am a hardcore X-Files fan. Watched what I could when I could while it was running, but sometimes Uncle Sam had other plans for me causing me to miss many episodes; sometimes entire seasons due to field exercises, deployments, and overseas tours. I was able to make up for it when they became available on DVD. I remember paying upwards of $150 per season as they became available a season at a time. Over time, prices for seasons fell horrifically, resulting in being able to purchase an entire season for $30-50. Now I can watch it all on Netflix for my monthly fee of $7.99.

At the end of each episode after the closing credits runs an animated clip where someone in the presumed audience abruptly calls out I MADE THIS! After watching so many episodes, I knew exactly when to say it in order to say it along with whoever it is making that statement. TMI? Get over it. I like the different types of those closing animations that run after the closing credits. Gives it a personality. Bad Robot. What does this mean? Etc. There are all kinds and Im always watching for them. If Im lucky and my show gets renewed for another season, sometimes these little clips change from time to time. Slowly evolving. Most often due to budget increases. But I digress.

Ive shameless stolen the I MADE THIS plug and use it when Im unveiling my latest creation or achievement to my wife. I call it my IMT. Ive noticed there are many BOTLs making things here. Lots of creative achievements. From bookmarks to our beloved Stogie Stands to HUD development for the birds to doors and furniture. I always enjoy watching the progress. I can see in my mind the end result and Im doing it. My wife cant. So she is always totally shocked. Shell say Thats what you meant when you said that I couldnt picture it.

So how about we share our different creations here? I think its always great to share ideas and procedures. Maybe someone else will get the inspiration to create their own and report back here with it. Maybe Ill learn something or two watching what you all did. Ill start it off with my kitchen island. We had a kitchen table, but that was used mostly for collecting items. A shelf, if you will. It was too low to actually do any real kitchen duty on it. Heh. I said duty. I didnt like the islands that were optional with the house when we bought it. Added too much price for what I actually would get. I knew Id just build my own and it would be as big as I wanted.

I went to Lowes and bought an unfinished kitchen sink cabinet that I liked the cupboards on and used that for the actual island. The problem was, none of these kitchen sink cabinets had drawers. Presumably because you would have a sink in the way. So those drawer looking things were just place holders. I wanted drawers up there, so I also bought a smaller unfinished cabinet just to steal the drawers out of and install them into the sink cabinet. I made the bar portion of the island extend way out from the cabinet - I wanted plenty of room. We picked out the tile that most closely matched the rest of the tile in the kitchen; floor and other counter tops in the kitchen. Watched a lot of youtube videos about laying tile, because thats exactly what you are doing with the counter tops  laying tile. What you wont see in the pictures is where I had to drill through the floor tile and foundation to insert the lead anchors that the island mounted to in order to keep it secure.

Captions are for the immediately following picture.

Here you can see both unfinished cabinets. The large sink one and the smaller one in the back used for the drawers. The oak back panel is on the left leaning against the wall. And thats Dolly, our old lady (Jack Russel/Chihuahua mix) we rescued from death row. 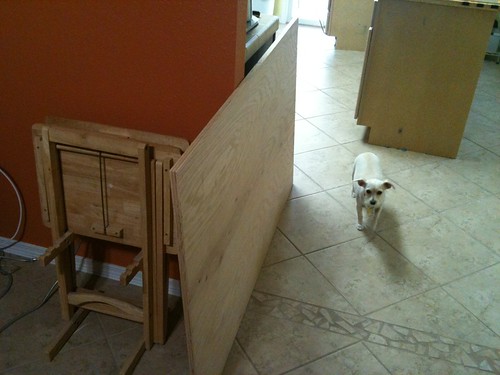 Here the drawers are installed but no knobs mounted yet, the top is laying over the island, and tiles laid out on top with spacers just to get an idea of the size. Instead of making a top and then laying the tiles and eventually cutting tiles to match, I laid tiles out and based the size of the top off of how many tiles I wanted to lay and not have to cut any to size. 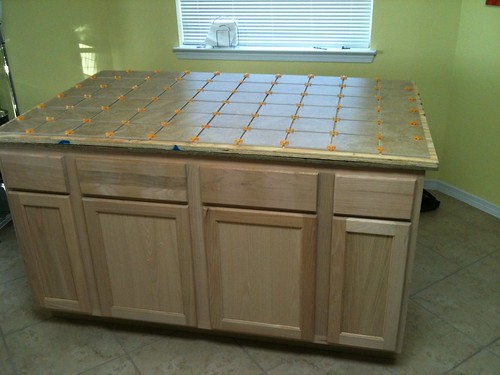 Side view, same time as above, showing how much the bar overlaps the island. 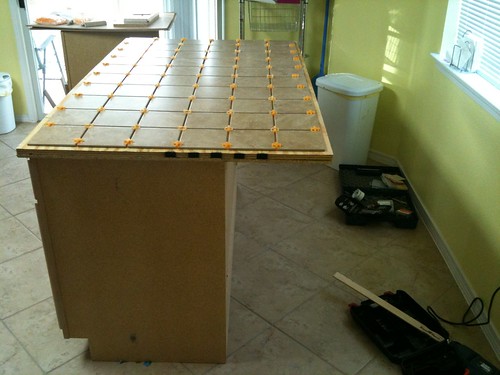 Since the bar does extend further than most, I attached 3 brackets for support along the back. Just in case. 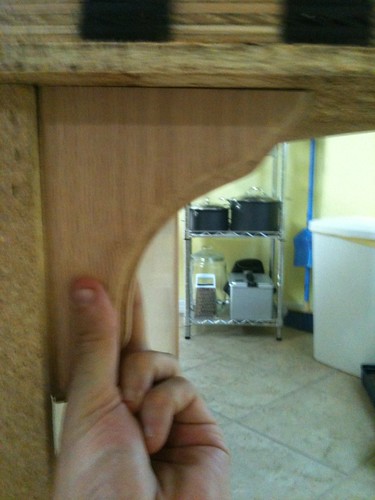 Corner trim applied with both nails and glue. Heavy objects placed along them to keep it tight all night long while the glue cured. All paneling and doors are oak. All the trim is pine. The wifes excellent mixing and thinning of the stain made it all look like oak. When you apply the same stain to different types of wood it always looks different. She did well. She does all my staining and finishing. Its so much easier that way. ;-) 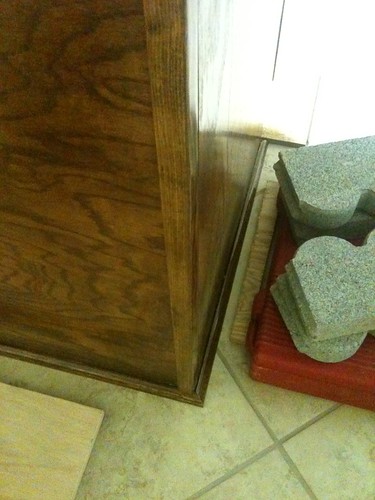 Other side, same concept. Heavy things were used to let the glue cure overnight. Plus there are brad nails in it all. I was determined to make sure they would not come loose over time and floor mopping and vacuum bumping. 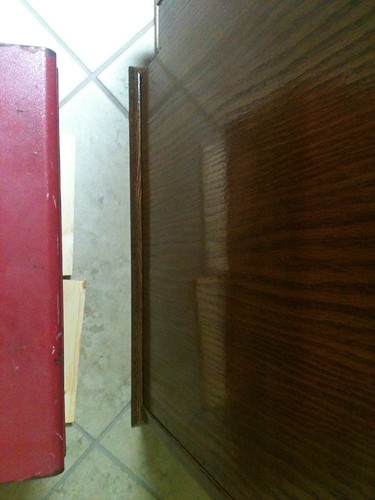 Completed view where you can see how closely it matches the other counter tops and the floor tile as well as the other cabinets. 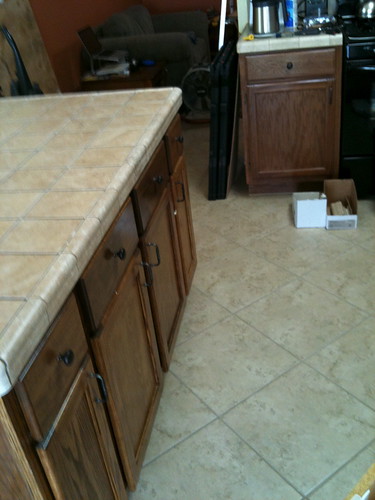 Close up of the tile and grout. 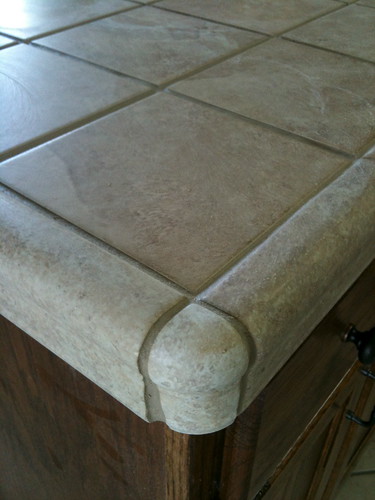